The International Wolf Foundation jury committee in architecture has decided unanimously to award the 2019 Wolf Prize in Architecture to the architect Moshe Safdie for a career motivated by the social concerns of architecture and formal experimentation.

The jury cited Safdie’s exemplary career as “motivated by the social concerns of architecture.”

“Over a long and distinguished career spanning 50 years, Moshe Safdie has produced a body of work of great originality and artistry in the field of architecture and urbanism. The projects undertaken by his architectural studio consistently seek experimentation and can be understood as an evolving form of research. He is also a distinguished educator and in his numerous publications he has articulated a clear and coherent position as an academic and critic.”

Safdie, a citizen of Israel, Canada and the United States, is an architect, urban planner, theorist and author.  He was born in Haifa in 1938 and relocated to Canada with his family in 1953. He graduated from McGill University in 1961 with a degree in architecture. After apprenticing with Louis I. Kahn in Philadelphia, Safdie returned to Montreal to oversee the master plan for the 1967 World Exhibition. In 1964 he established his own firm to realize Habitat 67, an adaptation of his thesis at McGill, which was the central feature of the World’s Fair and a ground-breaking design in the history of architecture.

Safdie established a Jerusalem branch office in 1970, commencing an intense involvement with the rebuilding of Jerusalem. He was responsible for major segments of the restoration of the Old City and the reconstruction of the new center, linking the Old and New Cities. Over the years, his involvement expanded and included the new city of Modi’in, the new Yad Vashem Holocaust Museum, and the Rabin Memorial Center. Significant works in Israel include Ben Gurion International Airport, the national campus for the Archeology of Israel, multiple projects for Hebrew Union College, the new city of Modi’in, Yad Vashem Children’s Memorial and Holocaust Museum, and the Rabin Memorial Center, among others. 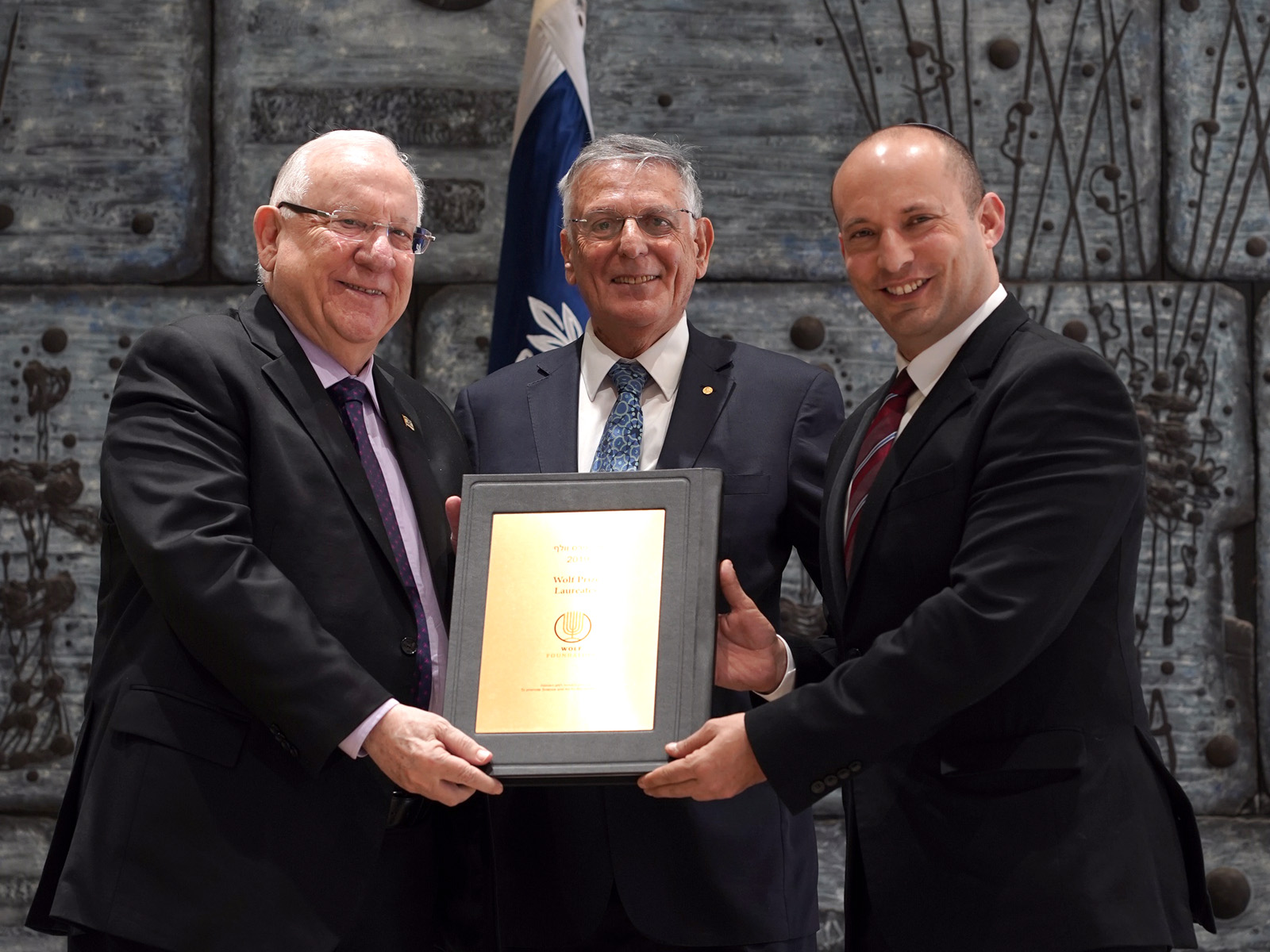 Israeli President Reuven Rivlin, Wolf Foundation acting chairman Prof. Dan Shechtman, and Education Minister Naftali Bennett at the announcement of the laureates. Photo by Dudi SalemSince 1978, five prizes have been awarded annually, four in the sciences and one in the arts on a regular basis. The prize is awarded to renowned scientists and artists for their unique contribution "for the sake of humanity and for friendly relations between nations, without distinction of nationality, race, color, religion, sex or political outlook." The areas of prizes in the sciences are agriculture, chemistry, mathematics, physics and medicine. The areas of prizes in art are music, architecture, painting and sculpture. The prize is $100,000 in every field. When more than one winner is chosen in the field, the monetary prize is shared among them in equal parts. To date, 329 recipients have been selected from around the world.

Award winners are selected by international professional judging committees of three members of renowned experts in their fields. Each committee is appointed for one year only. The judges' names, as well as their deliberations, remain confidential. The first public announcement about the prize winners is given by the Minister of Education.  According to the law, the President awards the Wolf Prize winners to a special ceremony at the Knesset building in Jerusalem.  This year’s ceremony will be held in May 2019.

The Wolf Prize has a very prestigious international reputation, and is considered the second most important in the world after the Nobel Prize. More than 30 percent of the Wolf Prize winners were later awarded the Nobel Prize in fields shared by the two awards.

Top image drawn from the award announcement on Facebook Live, which can be viewed on President Reuven Rivlin’s page.