The 1.46-million-square-foot development features a steel diagrid dome covered with more than 9,300 glass panels and a multi-story terraced landscape. 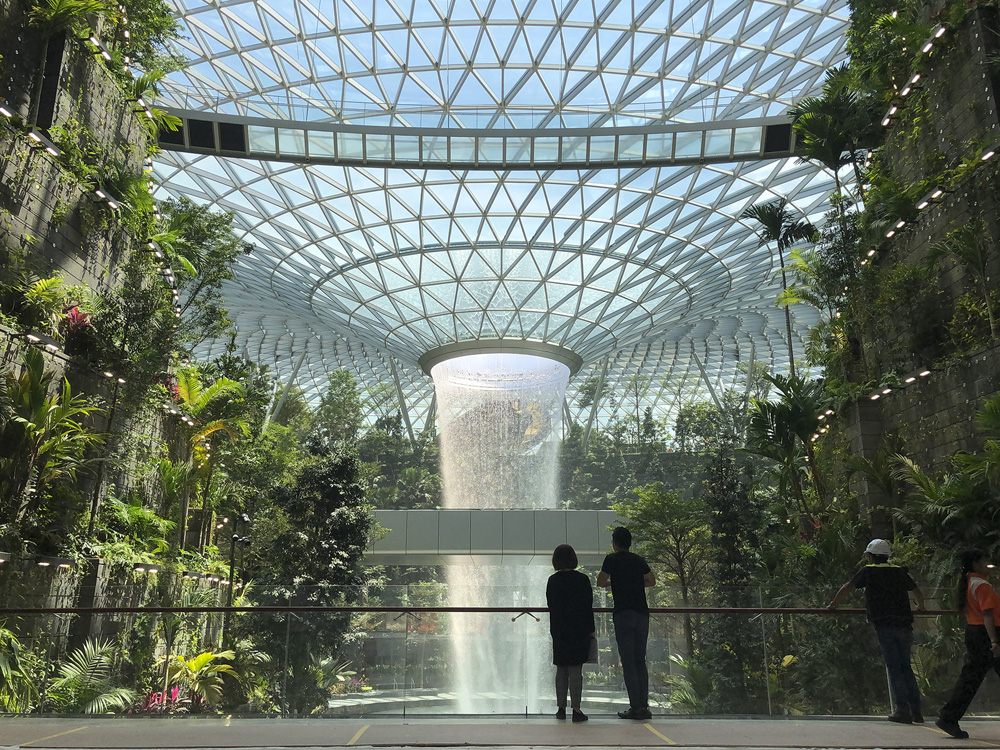 “We surprised Changi [Airport Group] with our reading of their brief,” says Jaron Lubin, design principal at Safdie Architects. The airport is already known for its lushly landscaped terminals, but Safdie’s team proposed putting a green feature at the building’s core. “The garden would be a framework where we could place all these other attractions,” he adds, in a phone interview from the firm’s Boston office.

Bringing together a garden and a mall while keeping them distinct was key. In a phone interview with the firm’s visionary founder, Moshe Safdie, the octogenarian revealed how the client initially wanted to blend the two.

“I said, ‘Hold it, you can’t have both together,’” he says. “You can have them cohabiting side by side. You can have particular moments when they look into each, like at the canyons. But you cannot have them penetrating, because as soon as you see a facade or a shop front, it’s no longer a garden.”

While Safdie persuaded the client to keep the programs isolated, his team worked with various collaborators to make sure they could coexist. Environmental design consultancy Atelier Ten created climatic conditions that are comfortable for people as well as the more than 200 species of plants that live in the space. BuroHappold Engineering’s roof structure and the waterfall also assist in controlling the atmosphere. 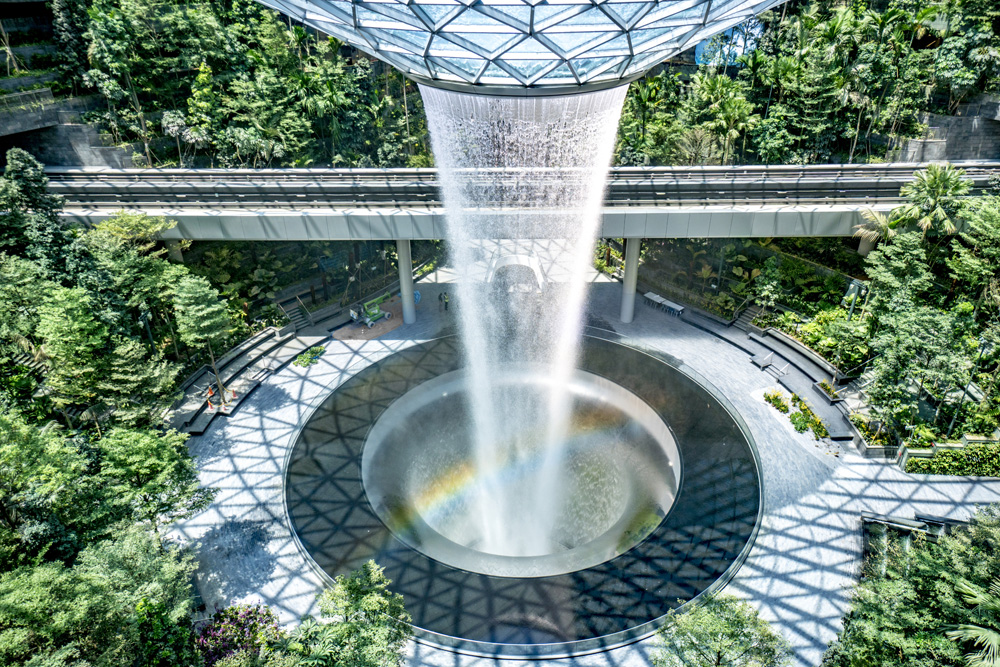 “If airports are going to be more than just a convenience to get to a plane, but [also include] shopping and all that, why not make it a much richer experience?” asks Safdie.

But besides rethinking the airport, the architect believes Jewel is instructive to other urban centers in Asia, where shopping malls dominate much of cultural and social life. These centers predictably tend toward consumerism and insularity, disregarding their natural environs. In addition to introducing the dimension of nature, Jewel’s transparent dome opens up to views and lots of daylight. Even the basement retail levels, designed by Benoy, receive ample light as the waterfall flows down via an acrylic drum that brings in illumination. 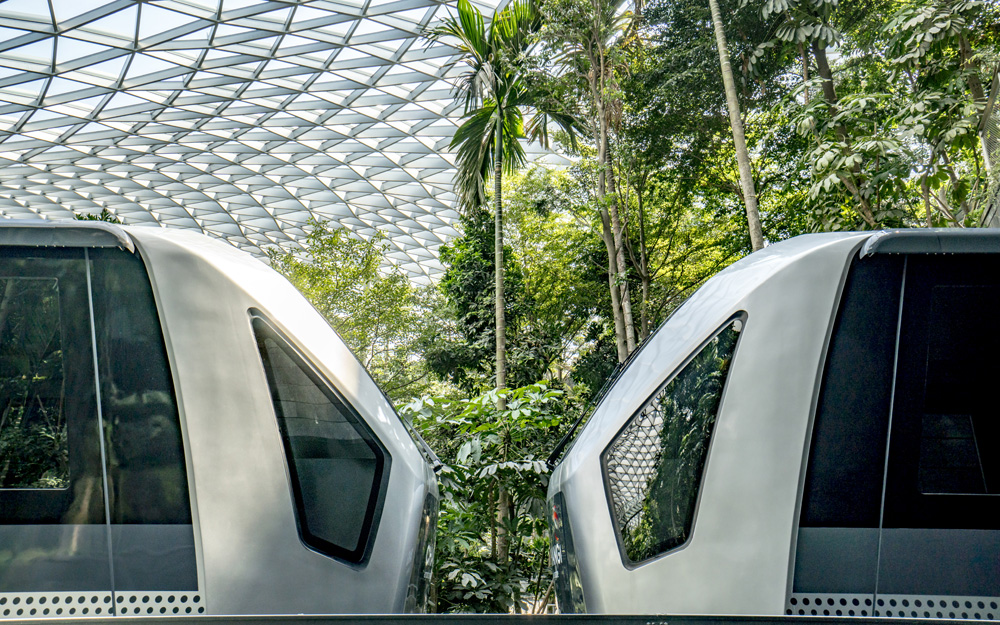 Will Jewel become a new icon for Singapore? Safdie certainly thinks so. The development is entirely accessible to the public, and Changi Airport at large is well connected to the commercial center via subway and buses. Locals already hang out at the retail and dining outlets at Changi’s other terminals. 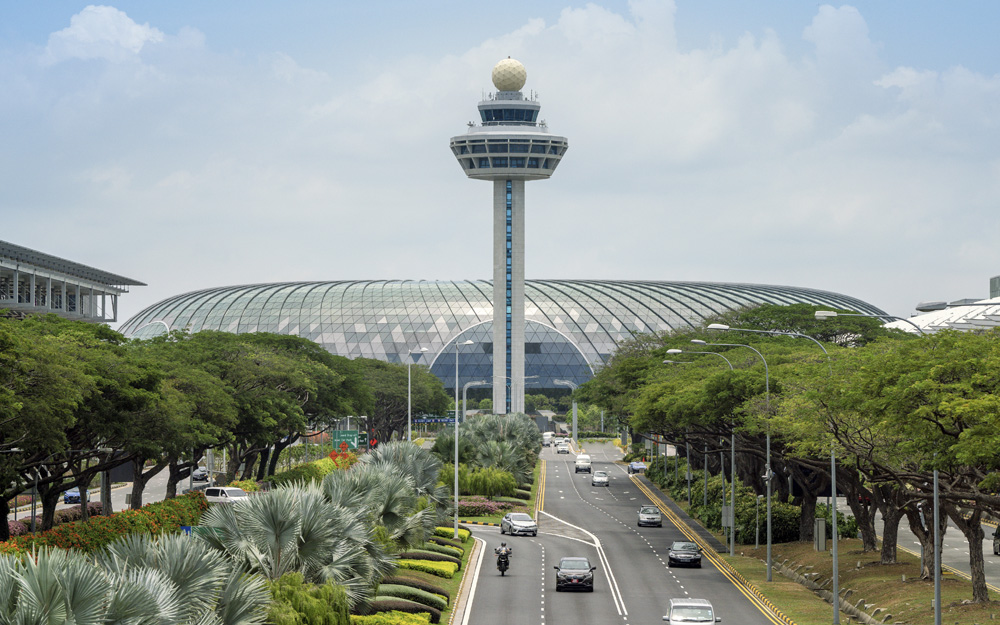 “The references to Singapore are always about being a ‘Garden City’ and a ‘City in a Garden,’ and Jewel is a physical embodiment of that,” Safdie says. “It shows that you can have this experience of nature together with shopping and all the things that make up a city.”

Excerpted from a piece by Justin Zhuang. Read the complete article on the Metropolis site or download it as a pdf below.